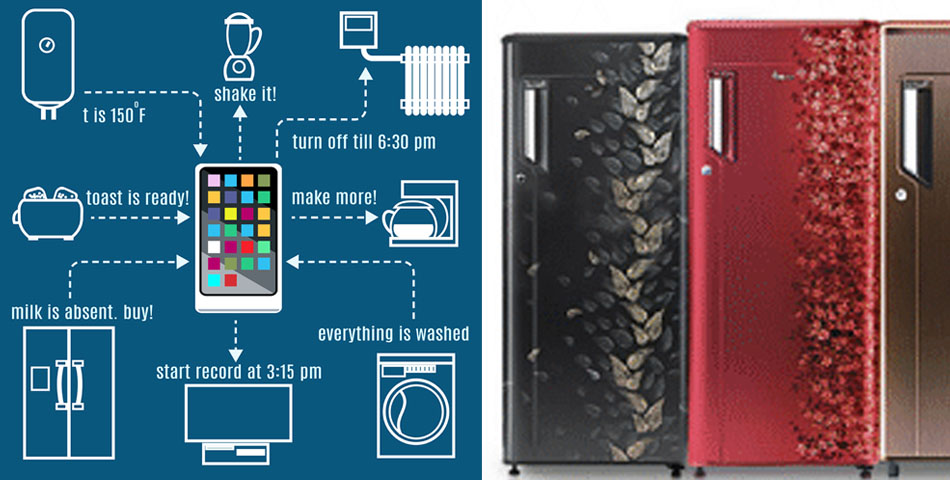 Views IoT Wave is at Your Kitchen Now!Posted on 4 August 2017

One swish, and the knives started chopping, the pans lined-up, and the flames began crackling. And soon, as the inviting aroma filled the kitchen, the food was in the plates. Dinner was served!

We all remember this from this exquisite sequence of events from our favourite fantasy and fiction movies. With the inimitable words of J.K Rowling, and Tolkien, and Terry Pratchett for company, the surreal teleportation into this world of fantasy has had almost all of us salivating. After all, who wouldn't like to sit back with the feet lazing on the couch as the food gets prepared on its own?

But then, alas; the trance breaks and the grinding reality of the sweat in the kitchen, and the food going bad surfaces.

Isn't this a rollercoaster that almost all of us have faced, and wished that the trance would never break?

Well, guess what! Technology has an answer to our wishes! Sure, they have still not been able to make knives fly, but then that doesn't sound like the best idea to begin with.

In this era of high-speed internet, constant connectivity, and smart phones, a new phenomenon has emerged that is slowly taking over our lives – the Internet of Things. But before anything else, allow us to tell you what this revolutionizing technology that is known as the IoT (Internet of Things) in the tech world is.

According to the geeks, IoT is a a network of computers, mechanical devices, objects, equipment, animals, and humans, that are connected through an ability to transfer data packets over a network.

In other words, everything, right from our fridges and ovens and the fire alarm systems, to the lights and the climate control settings in our homes, or rather, our extremely smart homes, are connected to our smart phones right in our hands, through a network of computers and the internet.

There was a time when white was the only colour available for the refrigerators, and Godrej and Allwyn were the only names that everyone trusted. Now, since these were the only major players that manufactured them, there was a good reason for that trust. And for those who could manage to shell out those mounds of money for these pieces of 'modern' technology, there was a waiting time of months before they could enjoy the luxury of milk not going bad if it was not consumed within the day. The focus was on the utilitarian aspects of these kitchen equipment and appliances, which is why the aspects like colours and design always lagged behind.

But as the years rolled by, and with India opening her doors up to the companies from across the world in the 90s, design and innovation became the focus areas in the world of kitchen equipments and appliances.

Companies like Kelvinator, Whirlpool, Samsung and LG began introducing refrigerators that were available in a variety of colours and sizes. This wave also brought in a gamut of other appliances like the microwaves, blenders, washing machines, water purifiers, stoves with multiple burners; a flood hit the markets. And as people lapped up the chimneys, and the stoves that ran on electricity, fumes and smells in the kitchen became things of the past.

But now with the increased consumption, the concerns for the environment have also increased, and energy efficiency has begun to get the spotlight that it deserves. Energy guzzlers like the refrigerators and air conditioners are being made in ways that they consume less energy, and even save energy, as per the commands of tiny sensors in them which tell to regulate the temperatures as per the external environment and the loads that they contain.

Comfort and design were not the only aspects that matter. Smart designs, innovative new appliances and kitchen equipment and have come into the markets. Let us have a look at some of these smart changes that have made our lives even easier –

Smart Refrigerators - After the refrigerators with the freezers being in the top half became a thing of the past, a whole lot of other features have been introduced in them to make these pieces of technology even more 'cooler'. Features like anti-microbial drawers; toughened glass shelves; options to have ice cubes, shavings, or crushed ice; and a temperature control system that lets the freezer double up as a storage space for the fresh produce, and vice versa; make us wonder what is next. Refrigerators that can double up as wardrobes?

Induction Technology and Flameless Cooking - A lot of times, there are places where a fire cannot be lit, and that presented us with a big problem in the era of gas stoves. Enter - induction technology which makes use of magnetic induction to transfer heat to the cooking vessels. This technology revolutionized the way cooking happens because environments like in an airplane thousands of feet in the air, or in the middle of a forest, and even in our own homes, since fire was a matter of concern, we not had an option that was absolutely safe.

Electric Cookers and Tandoors – And for those who want to opt for something that is a tad cheaper, but still safe, electric cooking technology that makes use of electric coils to heat up the food or steam inside the cookers and tandoors is the answer. And in these vessels too, all the innovative features like non-stick cooking, use of computers and microchips to monitor the cooking temperatures to ensure safety, and even pre-programmed recipes and times, are available.

Air Fryers – In these times of sedentary lifestyles, almost everyone worries about the calories in the food that we consume. And this includes the inventors and the big companies too. Enter, air fryers, because as the inventors of this appliance say, 'air is the new oil'. These appliances circulate superheated air to cook the food which is delicious without being soaked in oil. And in the words of Chef Gordon Ramsay, “yes, it won't have that deep-fried taste”, but then you can't win all the battles, isn't it?

Wine Chillers – Soon after the use of innovative technology to heat and cook our food without the use of an open flame, there was a wave of technology that helped us chill – our food and drinks. But unlike refrigerators, wine chillers do not use cold air to keep the temperatures low. These appliances use thermoelectric technology, i.e. a combination of microchips, superconductors, and electricity, to remove heat from the insides of the appliances, without the use of compressors and environmentally harmful gases!

Coconut Scoopers - After a countless numbers of hours, thousands of cut fingers, and a whole yard worth of broken knives that we had seen over the years, an inventor came up with an answer to our coconut-y woes in the form of this coconut scooper.

Corn strippers – We've all been through times when eating corn, one or two kernels at a time has tested our patience. But with this innovative device which removes the kernels from the middle portion of the cobs that is inedible, it seems like we will have to let other things test our patience.

Spiral Slicers - We eat with our eyes, which is why, now, a great deal of importance is being given to how the food is plated. And one of most important aspects of plating is the garnish, which is why this little equipment can help you in a big way. The various shapes and sizes of the blades that these slicers have help in getting spirals and other designs from the vegetables and fruits that you can use to enhance the way your food looks.

And if you still don't have these little pieces of smart kitchen equipments in your kitchen, we recommend that you get them – now.

Now, let us talk about the future. The future known as the Internet of Things, which has already begun unfolding in the form of a new wave of kitchen equipments that has started entering the lives of Indians; a wave where all these appliances and the humans using them are connected at all times.

LG Smart ThinQ cooker - A device with thousands of pre-programmed temperatures and timeframes, a feature to connect to other users to chant about recipes, and even a diagnosis tool that lets it find out what is wrong if it breaks down. A thing from the future? No, it is already available in India

SmartPlate - A device that tells you the precise amount of calories in your food by using three tiny cameras and weight sensors to help you monitor those calories. And it also connects with your wearable fitness trackers. Dreamy!

WeMo Crock-Pot Smart Slow Cooker – A device that monitors the temperature inside it while the food is being cooked, and adjusts it attain the right temperature depending on the recipes that are programmed into it. Goodbye, burnt food!

But what is happening in India is just the tip of the iceberg, and the Internet of Things is way bigger than what many of us can imagine. Many giants like GE, Samsung and LG, and countless tech-based startups have already begun changing the way we cook and eat, or in other words – live. Shall we take a look at what some of these are up to?

Refrigerators are being built with cameras that recognize the stored ingredients, and based on the recipes that they can access on the internet; they also give you suggestions about what you can cook. And that's not all. These smart appliances also connect with smart ovens or stoves to prepare them for the cooking.

Sensors are being built in to the refrigerators to monitor the time for which you store the food items. If something is going to go bad, a notification will be sent to your smart phones. No more food wastage!

And soon, you will also be able to connect your refrigerators to the portals of e-commerce companies, which will monitor the levels of milk, eggs, and everything else in the kitchen and send you notifications when you're running low. One click and the replenishments will be on their way!

All of this is great, but what about energy consumption? These companies have an answer for that as well. Smart thermostats and air-conditioners are now connected to computers to monitor the weather and adjust the temperature accordingly. And if you want to control them manually, you can do so with one click in the mobile app that is connected to these smarty pants, we mean, devices.

And for all the coffee addicts, there is a wearable device which monitors your sleep patterns. When it senses that you're awake, it sends the information to the coffee machine to ensure that you have fresh coffee waiting for you as you enter the kitchen.

So, while we wait for the scientists to come up with something that is reminiscent of the fantasy worlds, letting the innovative world of science driven wizardry known as the Internet of Things enter our kitchens seems like the way where everyone is headed.