Goa, the 25th state of the union state of India, is located in the Western coast of India along the Arabian sea. It is the smallest state in India having an area of 3702 square kilometres, with its capital Panaji and local language Konkani, having a population of over 1.8 million people. Goa is a hot tourist spot for both international and national tourists because of its rich flora and fauna, white sand beaches, architecture, religious spots and most importantly the multicultural cuisine.

Goa's early history says that it was first under the Maurya empire under the rule of the Buddhist monk, Ashoka between 2nd century BC and 6th century AD. Around the year 1510, the Portuguese invaded Goa and took over the land by defeating the ruler sultan Yusuf Adil Shah. Since then, the Portuguese ruled the Konkan for about four and a half centuries, all the way till Goa was disenthralled from their rule in 1961. Having had a very long colonial past with the Portuguese, Goa's heritage and cuisine is said to be a confluence of cultures. Aside from Portuguese culture, Arab, Chinese, Brazilian, French, Malaysian have also been a big part of the Goan culture. The native community has no less contribution to the beautiful culture of the land of the sand.

Goa has a huge culinary diversity because of the colonial past it holds. The Portuguese indeed left an ineradicable mark on the cuisine of the place and en-rooted its gastronomical practices. It is said that the fundamental ingredient used in almost every dish here -vinegar, was brought by the Portuguese. Moreover, the ingredients like chilies, potatoes, cashew nuts, pineapple, corn, guavas and a variety of breads and meats were brought to the cuisine of the Portuguese. Bread or the pao being the requisite part of the eating habits of the people, is a part of every meal, be it breakfast, lunch, dinner or even special occasions like Christmas. Whereas, meat plays a special and different role in every community and household.

The cuisine comprises of a variety of seafood, coconut milk, rice, pao and native spices. The king-fish is one of the most loved delicacies here, followed by the squid, prawn, crab, lobster, shellfish, black and red snapper, oyster, tuna, mussels and many more. The use of spices in their dishes is intense, giving the dishes a profound flavour. Kokum is another striking character which is used to add a savoury flavour to the dishes and the kokum juice has various health benefits like expelling heat, good digestion, reducing acidity and relieving sunstroke. Being a tropical land, the use of coconut and rice is mutual to many dishes around the land. Fish and rice, also known as kadi or ambot, are the staples here.

Goa can never disappoint its tourists with the amazing dishes it serves. Although the Portuguese do play an important role in its wonderful and flavourful cuisine, the local Konkani food also plays a very vital role in maintaining the integrity of the menu here. One of the most famous dishes around here is the GOAN FISH CURRY, also known as the xitti kodi, which is also a huge favourite here.

It's loaded with spices, and raw mango is added as well to give it a tangy taste, with coconut going hand in hand. The fishes used in it are either Pomfret or Kingfish, and the curry is served mostly with rice. Another favourite is the PORK VINDALOO; the word vindaloo means vinegar (vin) and garlic (ahloo). It is prepared by creating a mixture of spices, vinegar, chillies, onion and pork, and then the marination is kept overnight to let the meat soak in all the goodness of these ingredients. Goa provides a huge variety of vegetarian food such as the mushroom pulao and tomato curry, mushroom cutlet and mushroom fry, kokum juice, rice puri, mixed vegetable curry, eggless cucumber cake are some of the traditionally prepared vegetarian delicacies here. 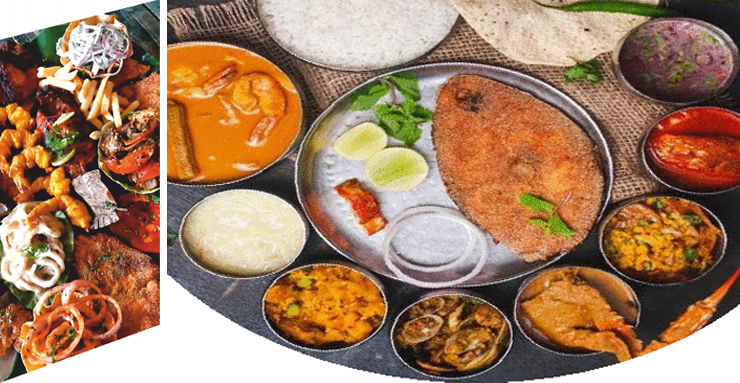 The three major communities in Goa are the Hindus, Muslims and Christians who contribute to the cuisine significantly in their own way. The Hindus follow the Saraswat cuisine which comprises of tamarind,

kokum, jaggery, curry leaves, mustard, urad dal, hing (asafoetida) and methi (fenugreek) , including vegetables like bamboo shoots and roots, pumpkin, a variety of gourds, lentils, and coconut oil is the major medium for the cooking and preparation of the food. Some of the traditional hindu dishes are fish curry & rice(the staple food), fried fish, dangar- fish cutlets, bhaji- fried fritters dipped in besan batter, varan- a festive dish made of lentils, coconut milk with a hint (tadka) of mustard, curry leaves and chillies. Pickles and papads are some sides with these dishes. A variety of sweets are prepared with rice, one of which is kheer which is a rice pudding prepared with cooked rice, milk and sugar and it happens to be a very famous dessert here.

Just like the Hindu community, the Muslim community's staple food is fish and rice. The food here has an influence of the Arabic, Turkish and Persian cuisines thus making the food filled with middle eastern flavours. Maleeda is the most common and loved sweet dish in this community. It is said to be passed on orally and has never had any written recipe. The major ingredients to prepare this dish are wheat flour, milk and honey. A dough was prepared by kneading this mixture and then baked like chapati and once it was baked on a pan it was broken down into crumbs into which the dry fruits were added. Another dish called mutton sukka (dry) is an all-time favourite, prepared by covering the meat with a thick paste of spices and cooked. Some other delicacies of the community are sweetmeat and moong kheer, which is an Eid special.

Over the Portuguese rule, the Catholic community was highly influenced and their cuisine comprises of a mixture of Portuguese cuisine, Saraswat cuisine, British cuisine, South Indian and of course Konkani cuisine. Assado de Porco, is the heart of goan christian weddings; it is prepared by roasting the pork in the oven- the meat is juicy and flavourful and festive. Vinegar and spices are the main elements of their curries. Beef and prawn are one the most commonly used meat in the christian goan cuisine, sliced roast beef or tongue beef is a key dish in all goan galas. A samosa like dish chamuca is yet another beloved snack of the christian households; it is filled with minced beef or pork. Bebinca is a traditionally prepared layered cake (7 to 16 layers), and its ingredients consist of coconut milk, sugar, ghee, flour and egg yolk. This dessert is a Christmas special.

A place with such amazing days of yore definitely leads us to amazing authentic dishes. Goa serves us a heartful platter of great historic dishes like Arroz doce- a traditionally prepared Portuguese rice custard, croquette- a roasted beef roll, tondak- a gravy made with bean or peas which is commonly eaten with pao, canja de goa- soup made on a saucepan with chicken, garlic, onion, rice and water, feijoada- a beef or pork stew, solachi kadhi- a coconut and kokum spicy gravy, sanna- a dry rice cake similar to idli, kalputi- head of a large fish prepared with onions and coconut, fulfilling all sorts of spicy and flavourful cravings.

Not just snacks and main course but Goa also has a variety of sweets and desserts to offer. Serradura- it is a Portuguese layered dessert pudding made of tea biscuits and whipped cream, doce bhaji- also known as lapsi is a traditional tea time dessert made of wheat, sugar and coconut oil which then garnished with almonds, baath cake- a layered cake made with semolina (sooji) and coconut, baklava- a pastry made of fillo dough and filled loads of nuts, cocada- also known as kokad is a famous coconut candy, dodol- a halwa like dish made of coconut milk and coconut jaggery, bolinhas- a crispy coconut cookie, perad- also known as guava cheese, is a classic festive sweet made of guava, sugar and lime juice, and coconut ice- a pink coloured summer favourite dessert made with icing sugar, condensed milk and coconut. These are some of the most loved and famous desserts in Goa, yet proving it to be a perfect spot for a sweet toothed tourist.

Goa is not only a beautiful place but also a perfect spot for foodies. It offers us all sorts of dishes, be it seafood or meats of ground animals, non vegetarian or vegetarian, sweet or spicy, Goa has all to offer. A perfect place for a perfect vacation. The beaches, sunsets, wind and cuisine is definitely pure bliss! 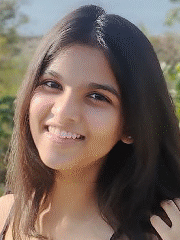