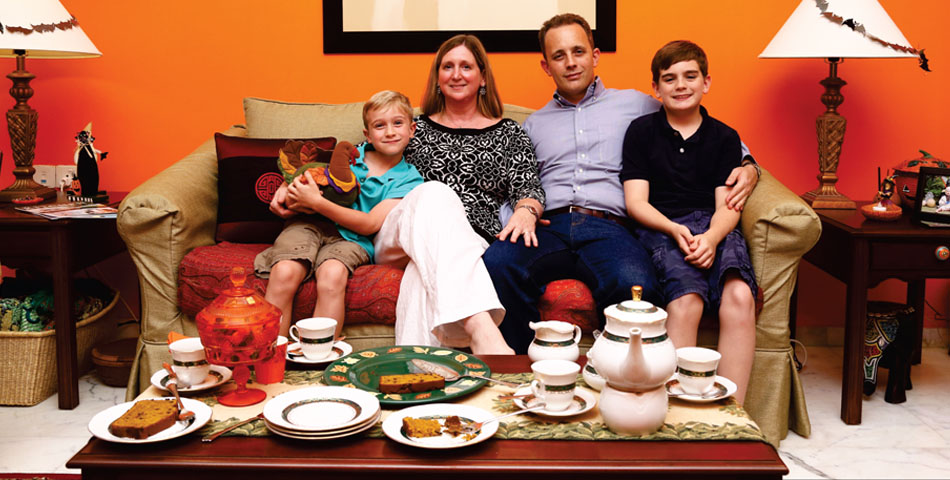 A wise man once said, “Gratitude is the inward feeling of kindness received. Thankfulness is the natural impulse to express that feeling. Thanksgiving is the following of that impulse.” It's a holiday where the emphasis is only and solely on being thankful and expressing that appreciation to God and to one another. To further explore this all-American holiday we met up Michael Evans, the chief of the Consular Section at the U.S. Consulate General, Mumbai and his gracious wife Gretchen over coffee and cake.

Sitting in their enchanting South Mumbai apartment, which was decked up in the warm colors of Thanksgiving, we discussed at length about the significance of this holiday. “Thanksgiving is many hundreds of years old and it showcases many traditional American dishes. To recapitulate the story about a hundred colonists known as pilgrims who set sail heading for the U.S. arrived off the coast in September 1621 and they spent the winter in the ship and half the number of pilgrims died. Those who survived came ashore and fortunately they came into contact with the native Americans in the spring and summer and the native Americans were to help them understand how best to survive in the new world. After the harvest that year the governor decided to hold a feast and he invited the Native Americans and the pilgrims to join in the feasting,” said Michael.

The Evans family went on to share that many of the dishes we know today such as roast turkey and pumpkin pie were not available then and they do not know the exact menu of the first thanksgiving but they do know that many of the vegetables and corn were served as well as some traditional American dishes. We also know that a fowling party was organized by the pilgrims, which means that they hunted birds and cooked and served them on the table while the American Indians brought venison to the table. It was therefore an interesting combination of the Old World and the New World – the pilgrims representing the old world with their dishes of wild game and the native Americans representing the new world with their dishes and vegetables.

Delving deeper into the origins of the festival, Michael said, “In 1700 a proper Thanksgiving was recorded in history and it was then that the explorers of the old world brought the pumpkins for the first time into the new world. The first pumpkin pie recipe appeared in a book called American Cookery in 1793. By 1800 people began to relish turkey and it became a staple at Thanksgiving, almost synonymous with Thanksgiving.”

Thanksgiving was not established as a national holiday until Abraham Lincoln declared it a holiday in 1893 in the midst of the Civil War. The pumpkin pie and roast turkey took centre stage at the table. Now talking about present times, Michael and Gretchen informed that while the pumpkin pie and turkey are still indispensable, the cuisine includes a variety of food from all over the US and also what the immigrants have added to the multi-cultural heritage and the U.S. repertoire.

Michael feels that they have moved away from the religious import of thanksgiving to a large extent and have focused on the aspect of togetherness and celebration of the togetherness and an expression of gratitude for all the good things they have in our lives. They are increasingly seeing the day as a celebration day. “You will find Hindus, Muslims, Sikhs and other communities who have made the U.S. their home celebrate Thanksgiving more than Christmas. Consequently the food served on the occasion has also become multinational and enjoyable for the participants although the core items of stuffed turkey, mashed potatoes and gravy, cranberry sauce and of course the pumpkin pie are always there. With more vegetarianism nowadays a variety of vegetable dishes are also appearing on the table. The sweet potato has become very popular and you have mashed sweet potato served alongside the regular mashed potato for those who like its taste. The stuffed turkey is a delicacy that is a must at most Thanksgiving lunches and dinners. It can be stuffed with a variety of stuffing and rice is an accompanying item at some places with gravy whereas it can also be a stuffing, too. Vegetables vary from Squash to green beans, Brussels sprout, green peas, carrots, and there are umpteen recipes of side dishes and soups to suit your taste. For many the dessert section is very attractive. Apart from the pies there are cakes too. We once served a coconut cake which was highly unusual. The fact is that everyone gives a personal spin to the item served and that makes it all very interesting and special. The important aspect of Thanksgiving is the spirit of being together and having an enjoyable time in the company of friends and family,” said Michael.

“Actually the recipes vary according to the place you hail from. People from the South generally use corn bread as stuffing, dressing and base. If it is used inward it is stuffing and if it is used outward to cover the turkey for example it is dressing. And many cooks use corn bread as a base in their baking. People from Boston and Massachusetts make white bread, people from San Francisco make sour dough bread that goes into the stuffing and there are many who use oatmeal which can be delicious but heavy. Up in Minnesota where they have a lot of wild rice they use that in the stuffing. In fact the taste is enhanced by the ingredients. You can use dry fruits as an ingredient along with the vegetables if you want to give a sweet taste and you can add spices to the stuffing if you want to give it a little pungency. There are many who like to add pepper corns to the ingredients because they like its tangy taste,” added Gretchen.

With their adorable boys running around the house while Michael helped Gretchen bake an assortment of delectable pies, the festive spirit was in full bloom in the Evans household. Tasting the master bakers freshly made pies, we bid adieu to the loving couple who's been married for 25 years.

Mix the first four ingredients. In a separate dish, beat the remaining ingredients. Combine the two mixtures and stir until moistened. Hand mold into 4 balls. Chill 15 minutes before rolling out on a floured surface. Makes 4 pie shells (either 4 one-crust pies or 2 two crust pies).

Freezes well. To freeze, wrap each ball in aluminum foil, then put into a freezer bag. Keeps frozen for 3 months. To use, thaw overnight in refrigerator or 2-3 hours at room temperature.

Preheat over to 425F (220C). Prepare pie shell with one pie crust. Mix pineapple with flour, sugar, salt and cardamom. Fold in cranberries. Line pie shell with fruit, for colour make sure cranberries do not sit on the bottom. Roll out second pie crust, cut into 7 strips approximately 10 inches long and one inch thick. Weave three crust strips under four making a lattice top. Crimp edges to pie base, decorate with stars, hearts, etc. cut from remaining pie crust if you wish. Bake 35 minutes. Brush crust with milk, sprinkle with sugar, bake an additional 3-5 minutes until browned. Cool on a wire rack.