16 February 2020Bhopal Bowled Over by EverestBKCC 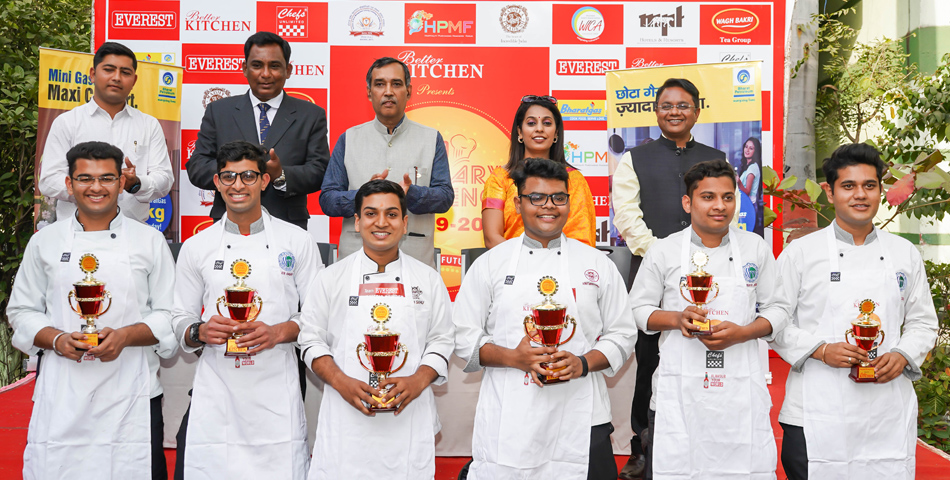 Everest Better Kitchen Culinary Challenge (EverestBKCC) Bhopal edition was inaugurated by P. Narahari, Commissioner – Public Relations, Government of Madhya Pradesh at the Institute of Hotel Management Catering Technology & Applied Nutrition.Students’ Teams from Bhopal, Indore, Jabalpur, Rewa, Gwalior and Khajuraho participated in the culinary competition which is aimed at providing them a platform to showcase their culinary skills, talent to play with ingredients and their ability to innovate and create new recipes and showcase the same before the Executive Chefs of star hotels in the city who were present at the much awaited event.

The competition is part of the seven cities challenge with its mega finale at Mumbai in the first week of March, 2020.

He added that “the future belonged to the food industry and there was ample scope to excel and create a niche position in the field”.

Anand Kumar Singh, Principal – IHM Bhopal made the participants aware about the scope of success and its rewards in the field of culinary arts. “Nowadays culinary art is not restricted to kitchen. The skill gives an opportunity to the practitioner to interact with guests, gain recognition through television shows, become food journalists and write articles and books and specialize in the art of food styling, etc.

Theme of the Challenge for budding chefs was Flavours of India and for amateur/home chefs it was Traditional & Forgotten Recipes. The common intention of the multi city event is to make Indian food popular across the globe and create awareness about its health benefits.

Kamlesh Kumar of Bharat Gas explained the safety tips and precautions to be taken in the kitchen with a special focus on LPG gas.

The winner of EverestBKCC Bhopal best team title was Everest Turmeric from IHM Bhopal, first runner-up team was Everest Meat Masala, second runner-up team was Tea Masala. Both the runners up were from SIHM – Indore. The challenge was very competitive and hence the jury had to decide to extend the special recognition award to team Everest Kashmiri Lal.

Winner in the category of amateur / Home chefs was Samar Singh Gaur. The first and second runners up were Dr. Babita Saxena and Smita Saxena respectively.

Ekta Bhargava, publisher of Better Kitchen said that EverestBKCC was preparing budding chefs for the tough challenges they are going to face in their career and such an event was the best way of providing them a platform to showcase their skills of creativity and use of ingredients in a proper way.

Ekta thanked the Principals and HoDs of participating colleges, sponsors, staff of IHM – Bhopal and students for making the challenge a great success.

19 January 2020 EverestBKCC Started with a Big Bang from Bengaluru